England level the Series with thanks to Ben Stokes 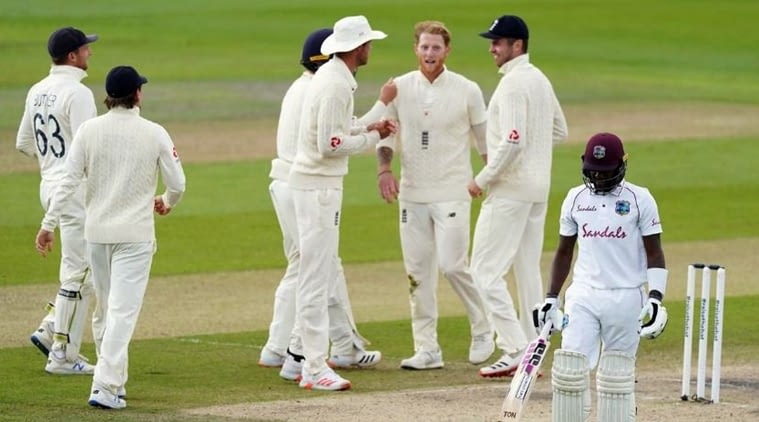 England were looking to bounce back from losing the First Test at the Rose bowl.

England had to make four changes with Stuart Broad coming back into the team, Jofra Archer broke Covid 19 rules which made way for Sam Curran, while James Anderson was rested and Chris Woakes was given the nod as his replacement.

Both the Windies and England had to wait again as rain hit Old Trafford, but this time the first session did get under way. The Windies started off shaky with wayward bowling in prime bowling bowling conditions. Just before lunch, Rory Burns was dismissed by Roston Chase for 15. England at Lunch were 1/29 and were looking build a first innings total.

After lunch Chase was able to strike again with Crawley going for a duck and bringing Root to the crease for the first time since the South Africa tour. England were reeling at 2/27 but both Root and Sibley built an excellent 50 run partnership but then Root was undone by Alzarri Joseph who only made 23.

Ben Stokes and Dom Sibley then cracked on and both batted perfectly on a gloomy day in Manchester. With both batsman making half centuries, both were looking to making centuries on day two. England went into stumps on day one at 3/207.

England started Day Two brightly with Sibley and Stokes making timely centuries. Both batted superbly on a humid day in Manchester with Dom Sibley making his highest test score with 120 and Ben Stokes making his second-best score of 176. Both were key in making a huge first inning’s total of 9/469. Which included some late hitting from Jos Butler, who made a quick 10 and some tail ending hitting by Dom Bess with 30.

For the Windies they bowled without luck were stiff with their reviews as could not find that crucial wicket for some time. One bright spot for the Windies on a tough day with a 5-wicket haul for off-pinner Roston Chase with 5/172 off 44 overs. The Windies went into late Day Two with a mammoth total chase and were strife with John Campbell getting trapped by Sam Curran with a review for England doing the trick. Craig Brathwaite and night-watchman Alzarri Joseph survived the day and were looking eat into the total on Day Three. But Day Three brought the worst out of English weather as it rained all day and no play was possible. This portioned the match in an interesting position as both teams needed come out on day four fit and firing. The Windies were batting well with Alzarri Joseph looking like a batsman with 32 and Brathwaite’s partnership with Joseph was 50 valuable runs. But was undone by Dom Bess being caught at short leg. The Windies batted out until lunch with Craig Brathwaite and Shai Hope batting excellently with boundary after boundary with the scored at lunch at 2/118. It felt England lost their rhythm with the ball.

Both Hope and Brathwaite were looking to keep eating into the target post the lunch break. But Curran stroke early into the session getting Shai Hope for 29. Then it looked like The Windies were given lifeline with a review by overturning an umpire’s call as Brathwaite was looking making 50 which he did. Brooks got off a perfect start with a boundary and Brathwaite kept carrying the bat with Brooks. Brathwaite was looking to his first hundred in England since 2017 but Stokes broke his luck and excellent batting as he went out and caught and bowl for 75. The Windies still needing another 99 runs to avoid follow on and trailed by 268 runs. Their partnership was worth 76 runs. Brooks kept batting on, and he made his 50 off 101 balls. The Roston Chase and Brooks got to tea with 4/227 on the scoreboard and were getting closer to passing the follow-on target. After tea both were set but Broad struck Brooks right in front for 68. Then Broad knock over Blackwood for a duck and Windies were reeling at 6/248 still needing 52 runs to pass the follow on and trailing 221 runs.  Broad worked magic with new ball with another wicket getting Shane Dorwick LBW. Then Woakes knicked over Holder who was caught at slip.

This made the follow on target tight with still needing 8 runs to avoid it which they did with a  Roston Chase boundary. Chase went on to make 50 which went with his 5-wicket haul. Woakes got Chase LBW after Woakes overturned an umpires call and The Windies were then bowled out for 287 trailing by 182 runs. Broad was the pick of the bowlers with 3/66 off 22 overs and Chris Woakes with 3 wickets as well off his 21 overs. England had to bat just before stumps which is a tricky session it did not start well. With Night watchman Jos Butler bowedl for 0 by Kemar Roach which is his first test wicket for 11 months. It was the perfect start for the Windies. Roach took his second wicket with knocking over Crawley for 11. England finished the day 2/37 with a lead of 219 runs. This made for an interesting Day Five which was going to be tense with 98 overs to be bowl. The Windies wanting to take wickets early so they could chase down a score or for England hit quick runs to have any chance of levelling the series. That is what England did with Ben stokes hitting a quick 50 and was building the lead on Day Five. The Windies tried everything with a review on Stokes that would make you laugh from Holder.

Joe Root sacrificed his wicket for 22. Their partnership was 73 runs. With England still in a commanding position leading by 272 runs. The Windies went for another odd review in trying get Ben Stokes to slow the game down but it did not work. The Windies used their final review and was unsuccessful another very strange decision by Holder.

Stokes gave the Windies some payback with 10 of 2 balls off Holders last over. Stokes playing a lot of T20 shots to try to advance the game giving England a chance to win. England declared on 3/129. Ben Stokes was the star with 78 not out and included few big sixes. The Windies needed  to bat 85 overs to chase down 312 or survived a draw to retain the Wisden Trophy for the first time since 1995. It was going to be a tough test for the Windies but they do know how to bat a draw against England are more than capable.

If the Windies went on to win it will be the first time since 2017 against England, where they chased down 322, they would need similar batting effort here to win. It was ‘game on’ for England as well with an hour before Lunch to bowl at the Windies. It was going to be crucial in winning the Test match. The Windies looked the goods in the first over with 7 runs in the first 4 balls. Then the next ball, Campbell tried play the same drive. It seemed that he missed it but England went up for a review and did the trick and got the wicket. The Windies 1/7 and Campbell failing once more with only 4 to his name.

The Windies chances of batting out the day became less likely with both Brathwaite and Shai Hope back in the shed, as England looked menacing with the new ball. Stuart Broad was looking like the main star in helping England levelling the series. The after-lunch session was going to be the crucial session for the Windies and needed Brooks and Chase to bat most of the session so they could survive the next 74 overs. But Broad struck in the forth over of the session with Chase not playing a shot and given out, LBW. The Windies were reeling at 4/37.  Broad better of the bowlers for both teams started to take control. Blackwood and Brooks slow down the falling wickets with both batting well and both chewed up plenty of balls to make England worried. The  Windies with 60 overs to go looked like it was heading for a draw but then Woakes bowled a ripper ball to Brooks that hit the glove and went to Butler. But it was not reviewed which might have been costly as Brooks was digging in to safe the match. Then Ben Stokes found the edge of Blackwood’s bat from an usual shot and he was gone for 55 off 88 balls just on the stroke of tea. After tea, Woakes got Dorwich out for a 3 ball duck and it looked like a England victory was coming. But Holder and Brooks started digging in. Sam Curran finally broke through and trapped Brooks in front for 62 off 136 balls with still time to spare. Holder was trying his best, but Bess spun one through the gate to have the Windies in trouble 8/183. The man of the match Ben Stokes grabbed the second last wicket and Bess took the final to hand England the victory by 113 runs.

England level the series. All eyes lead to South Hampton where it will be on from the start.