England Win the Series and Broad takes his 500th wicket 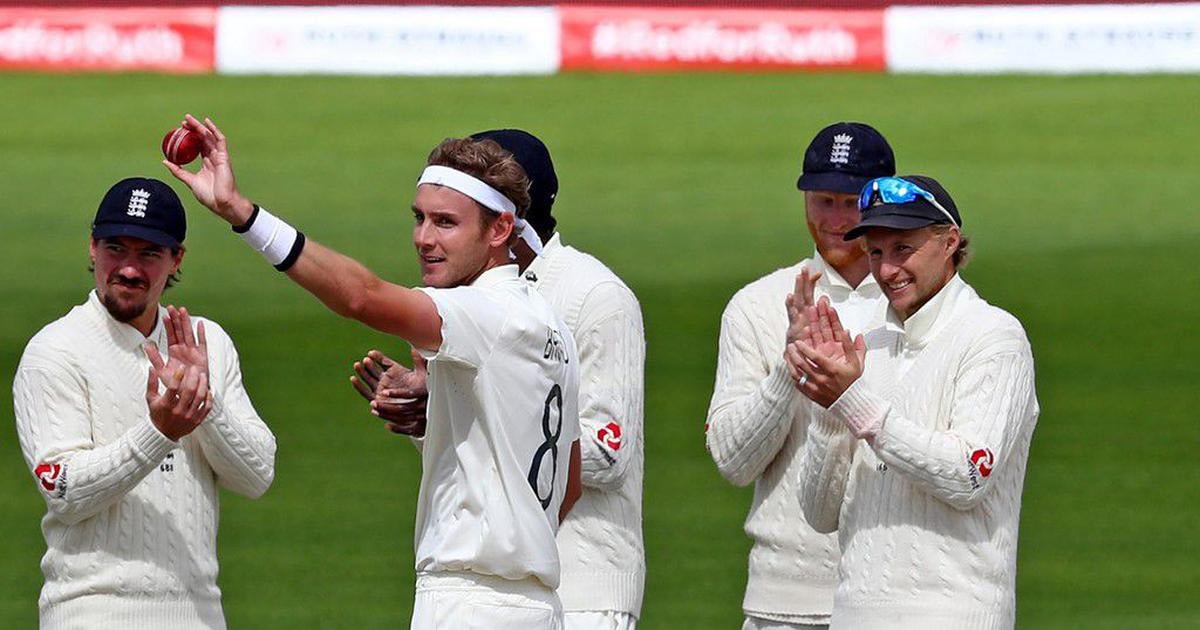 With series one-all and both teams looking for the win at Old Trafford it was going to be an interesting day one. With England bringing back Jimmy Anderson and Jofra Archer into the lineup and the Windies went for another spin option in bringing Rakeem Cornwall for the young Alzarri Joseph. It was the Ruth Strauss Day to add some colour to a gloomy day in Manchester. The Windies once again won the toss and elected to bowl. It worked well again early, taking their first wicket in over one, with Kemar Roach having century maker in the Second Test Dom Sibley trapped in front for a duck. Then Shannon Gabriel thought he had Root LBW but it was outside the line. Gabriel left the field and England capitalised on this with Burns looking the goods. England were 1/47 when Roston Chase pull off some brilliant fielding to run out Joe Root for 17. The session was quite even with the score at lunch, 2/66. After Lunch, Roach bowled a peach to all-rounder Ben Stokes. While Burns went on to make fifty and looking good until he was undone by Roston Chase and a sharp catch by Cornwall in slips.

England were in a tricky spot at 4/122 but Ollie Pope and Jos Bulter cracked on and got to end of the day with a crucial 100 run partnership, both scoring fifties. Day Two brought out the best and worst of the Windies. Early on it look like the Windies were in control taking 4/22 from 14 balls and had England reeling at 8/280 with Kemar Roach bowling well. But then, step up Stuart Broard who is known to be a handy tail ender. Paired with Dom Bess who then made a crucial 76 run partnership and with Broad making a quick 62 off 45 balls. This helped England swing back the test to be bowled out for 369. Then the famous combo of Jimmy Anderson and Stuart Broad started the rot early, with the help of Jofra Archer and Woakes, had England on top at the end of Day Two with the Windies 6/137 still trailing by 232 runs. Shane Dowrich and Jason Holder survived to the end of the day and looking to build on keeping the Windies in the test match.

How the Windies started on day three was crucial to keeping them in the game. The Windies started well with Holder and Dorwich looking steady but still needing 6 runs to pass the follow on. Dowrich was caught Woakes, bowled Broad for 37. The partnership was worth 68 runs.  Then wickets started to tumble, and England took a 172 run lead into their second innings. England started steady and were in no rush even there was the forecast of rain for Day Four. But Rory Burns and Dom Sibley were in fine touch, until Sibley was trapped by Holder for 56. Then Captain Joe Root and Rory Burns kept the building the total with a 112 run partnership which saw Root make his first fifty for the series and Burns making 90, who fell to Chase to a top edge to the sub keeper in Da Silva. England bravely declared at 2/226 with a lead of 399 runs with a rain coming on Day Four it was vital for England take wickets early and which they did. Dismissing night-watchman Kemar Roach and opener John Campbell to have the Windies reeling at 2/10 still needing to bat two days to force a draw or a win to retain the last ever Wisden Trophy.

Well Day Four did not go to plan for England with the whole day abandoned and pushing the match into Day Five with the Windies needing to bat 98 overs or chase down the target, while  England needed 8 wickets and they win the series and take back the Wisden trophy.  Well Day Five was England’s day with Stuart Broad and James Anderson turning back the clock to help England win the series. It also saw Broad take his 500th Test Wicket, having figures of 4/36 and was awarded the Man of Match for making his crucial 60 and taking 10 wickets for the match. The Windies were hoping for an unlikely draw with only 8 wickets in hand but collapsed and were bowled out on the stroke of Tea. This has been a brilliant series and is a great return for Cricket in due these interesting times. England will now play Pakistan in a 3-match series which will be interesting, while the Windies will head back home with an unclear fixture at this stage, due to Covid. But one positive for the Windies they were in it from the start and that is pleasing from a neutral.