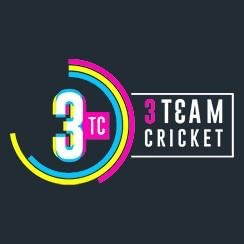 A new version of cricket called 3Team Cricket which sounds odd but boy it was quite cool to watch. The South African Cricket Broad decided to coincide the reopening of the country and signaling the start of the cricket season in South Africa with 3Team Cricket. It was an event to promote a new format and give sport fans something to watch during these interesting times.

A maximum of three overs per bowler is allowed. The winner was decided by the most runs. All three sides had all the best South African players like Faf du Plessis, Quinton De Kock, Kagisio Rabada, Chris Morris and also AB De Villers. Director of Cricket Graeme Smith acknowledged that the upcoming match may not feature players at their best due to lockdown but was hoping for a great match. “We’d be amiss to expect our players to be at 100%. They’ve handled the build-up, they’ve handled the lockdown well, they’ve done elements of training. But they haven’t been able to get the extensive cricket or outdoor training that normally we expect of them going into big contests,” he said.

It was seem to be a successful event with Ab De Villers’ team called the Eagles winning the match and with the champion batsman makign 61 in their 12 overs. This format is something that should be bit like T20 in its early days. It could be a perfect concept to help players get out of quarantine and into some sought of cricket, that is bit of fun, helping the return of cricket to Australia and New Zealand. Also, it would help their T20 game as well with batsman being able to practice their power shots and bowlers practicing a variation of balls. It could also create different tactics which make it interesting format to watch. In addition to this it brought back the fun of sport to South Africa which was much needed due to the horrible Covid 19 pandemic which has impacted South Africa greatly.

Cricket expert Mark Nicholas pointed out on the day’s events and how he wanted to grow the game said “Harris called Graeme Smith and Mark Boucher and they loved his idea for three teams of eight players each competing in the same match. Initially, the eight players was a Covid-19 thing, as the six fielders could do their bit in zones – cut like slices of pizza around the outfield – and therefore maintain the biosecure environment that was required to emerge from lockdown. Harris wanted cricket to lead the way with something fresh and innovative, something that might catch the attention of the young,”.

I believe this format is something that could be put to use in the international scene as pointed out by Nicholas “ If England were playing India and South Africa, for example, would you bowl the quicks against India and the spinners against South Africa? And if you do, in which half? And if the answer is the first half and it goes wrong, are you left exposed? Imagine the jeopardy. While two teams to slog it out against one another, the third team can creep up to spring a surprise,’. It seems it is something to keep our eyes on for the future of cricket and hopefully many cricket boards around the world support the idea. Maybe it could be the perfect way to kick off a season for state teams instead of playing boring List A games during a weekday instead having hit and gearing up for the T20 season which might appeal more to the public eyes. The World Cup squad for 2023 will likely be the same as last year’s side and even though International One Dayers are going to be crucial. The new improved qualifying system and the state One-Dayers might be not be as crucial to Australian cricket development. If the Covid19 pandemic continues for longer, maybe this could be an option for Australia, so state players don’t have pressure performing at such a high level once cricket returns and easing into this format it could benefit players as it much relaxed form of cricket and will be something that people will show like the big bash. Overall if you want to get younger generation or newbies into cricket you must find ways to keep them interested and understand the game. As we see they are already getting bored of T20 with crowd attendances dropping and having this new, fresh format it could make cricket evolve into the future, keeping cricket relevant for generations to come.