West Indies Go One Up 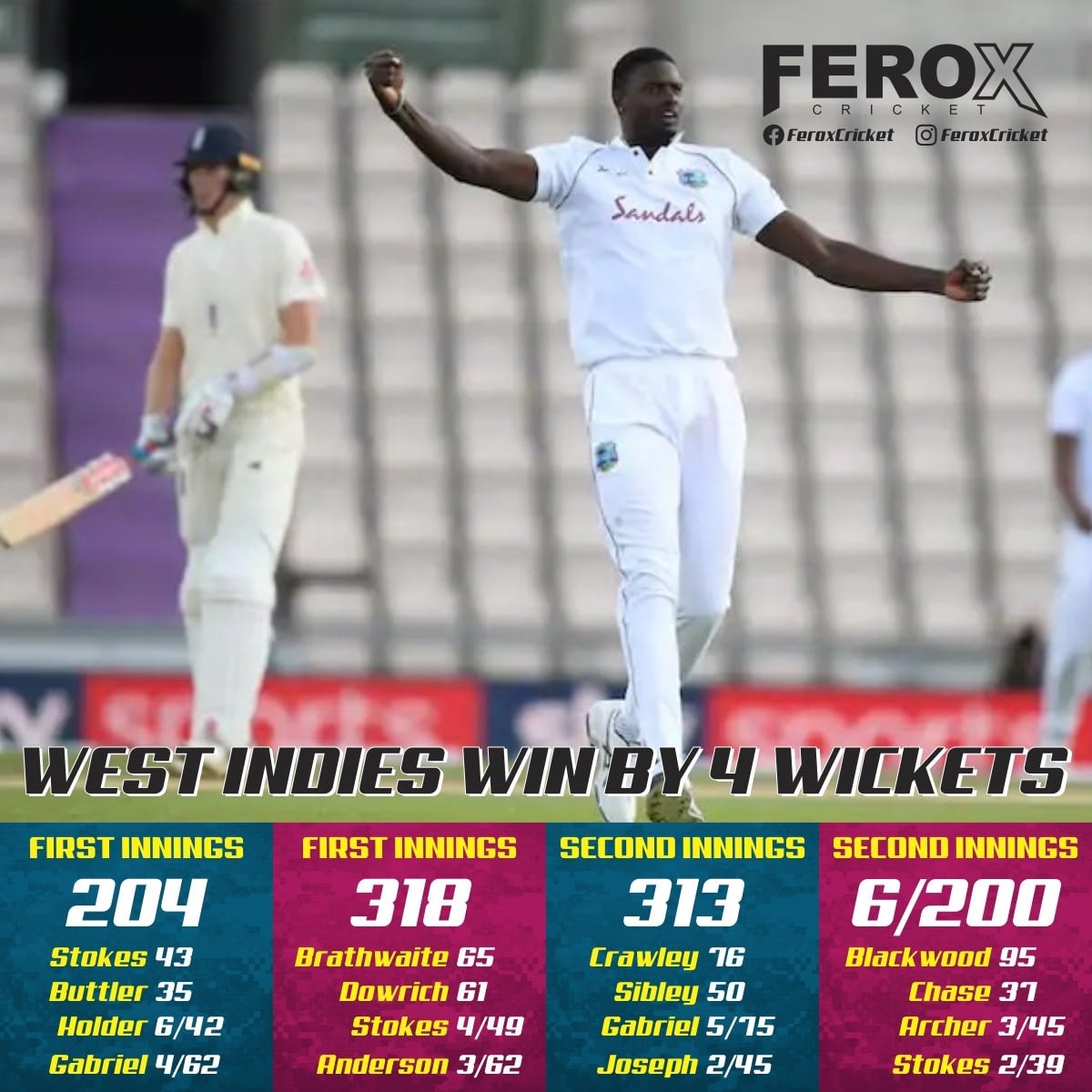 West Indies and England both showed their pride on display in a historical Test at Southhampton during these Covid 19 times. The match play was interesting with no fans, no salvia on the cricket ball and both players and the Sky sports crew all in the hub together, making it an interesting experience for all. But that is what was needed to be done, as we saw great game of Test Cricket.

Will all the distractions it did not stop Windies Captain, Jason Holder showing ‘who is boss’ with six wickets in the first innings, restricting England to 204 with the top score was first time Captain Ben Stokes with 43 but could not push on.

The Windies were strong from the start even though they bowl 17 overs at England on day one they looked ready to go. Then started Day Two with Holder and Shannon Gabriel taking the 10 wickets between them. Holder taking 6/42 off 20 overs including 6 maidens and Gabriel taking 4/62 off 16 overs.

The Windies batting has been concern in England as in last series there, which saw the Windies totally outplayed. But the Windies held their own with opener Kraigg Brathwaite and number seven Shane Dowrich both making sixties, taking the lead with a total of 318 late Day Three. Moreover, what helped the Windies, was the absence of Stuart Broad who made his anger clear to the selectors on Sky Sports during the coverage.

One big finding for England was Dom Bess, who did bowl well and taking 2 wickets in the first innings as the number one spinner which has been a head scratcher for selectors.

One bowler that could be under the acid is Jofra Archer, as he did not show his full potential that was shown in last years Ashes Series. Archer took no wickets in the first innings and Broads replacement, speedster Mark Wood only taking one wicket in the first innings.

Jimmy Anderson was back to his best with ball with 3/62 but Captain Ben Stokes did what he has done before fought back with the ball with 4 wickets as the Windies taken a 114-run lead on late day three.

On the end day three there was no damage for England with both Rory Burns and Dom Sibley at the crease and wanted make ground in creating a tough target.

Day four was a tough encounter for both teams and the Windies made most advantage with disciplined bowling which help them broke up key partnerships of Ben Stokes and Zak Crawley and stopping openers Rory Burns and Dom Sibley both looking like taking game away from the Windies, after both making starts. Sibley making 50 while Burns will be kicking himself with only 42 and handing his wicket away. It was not all doom and gloom for England with Crawley and Stokes fighting back with a 98 run partnership and were looking a build lead but undone by some magic by Gabriel, Holder and the new boy on the block Alzarri Joseph who crawled back England. Crawley went on to make an impressive 74 and Ben stokes fell four runs short of a half century. After this though it was all the Windies, with Gabriel taking last two wickets to hand the Windies a lead after Day Four as England were 8 for 284 with a lead of 170 runs.

Day Five was set up to be a big day for both teams with England only 170 in front, putting the pressure on Jofra Archer and Mark Wood to hold out as long as possible at the crease and make a tricky total to set for at the West Indies.

The Windies were wanting quick wickets early Day Five to take their First Test win in England since  2017.  The Windies did just that, even though Archer hit a quick 23 to set the Windies a target of 199.  Shannon Gabriel was pick of the bowlers in the Second Innings taking 6 wickets taking his total to 10 for the match. But, the Windies got off on the wrong foot with the bat with Opening Batsman, John Campbell retiring  hurt and then Jofra Archer who was under fire after his lack of First Innings wickets, took 2 quick scalps to have the Windies reeling at 2/24, still needing 176 runs. Then it got worse for the Windies with Mark Wood striking in his first over knocking over  Shai Hope for 9 with the Windies still needed 173 runs. At Lunch it was evenly poised with the West Indies 3/35 still needing 165 runs. Roston Chase and Jermaine Blackwood were in after lunch and looking to start steadily. They combated Archer and Wood well, who were looking dangerous in the first session on Day Five. But the two carried on and were guiding the Windies to a famous win with adding 50 runs between them mid-way through the middle session. Then at the end of 30th over Zak Crawley missed out on a perfect runout chance but with Chase hesitating mid pitch.

Then two miss chances went begging for Ben Stokes with two dropped catches from Jos Bulter   when Blackwood was on 20 which was undetected by the umpires and then gully fieldsman Rory Burns dropped Blackwood on 30 with the Windies still needing 116 runs. It was a poor day in the field for Ben Stokes and the team.  Blackwood was batting with a sore right eye to add to the drama to this chase.

Then, Archer produced a magical bumper to dismiss Chase for a crucial 37 and break up a 77 run partnership with Blackwood during middle part of after lunch session. The match was now evenly poised with the Windies still needing 100 runs on an uneven surface. It looked like Archer was going to produce some magic for England once again.

That was Archers third wicket for the match and had been bowling menacingly on Day Five with roughing up the Windies batsman. Then the off-spinner Dom Bess thought he had Shane Dorwich trapped but could not overturn the umpires decision on a LBW decision. The man of hour Archer thought he also took the wicket of Dorwich but he hit the elbow not the glove from a nasty ball and was overturned by Dorwich, via DRS. Blackwood got to his 11th fifty with an edge but it was crucial fifty coming from 91 balls with the Windies needing 76 to win and plenty of time to play.

As the Windies went into tea with 57 to win and 6 wickets it looked even. But the Windies held on with Blackwood going on making a match winning 94 with the help of Dorwich, who made a key 20. With Jason Holder and the injured John Campbell finishing off the remaining runs to a take a One Match series lead. New Captain Ben Stokes tried to lead a comeback with dismissing both Blackwood and Dorwich but could not produce a miracle. This positioned Holder and his team in a great position for next test at Manchester as they have a chance to retain series for the first time since 1995. It was a great day for Windies Cricket and highlighted the need for Stuart Broard in the England team and also the need for Joe Root in the batting line up.